“I believe in spiritualism. It’s like, when you listen to music or something and then you’re sort of primed. If you’re an artist, you’re sort of primed and inspired, and you start drawing, you sort of have the spirit of what you’re listening to, still in you. You just have sort of an inspiration. Or a feeling, would probably best describe it. You have a feeling from the music, so you start drawing and it’s an influence. That’s spiritualism.”

Daniel Johnston was born in Sacramento in 1961. As a teenager diagnosed as schizophrenic and bipolar. His brother Dick Johnston who took him under his wing. Multi-talented artist, Daniel Johnston is a singer, pianist and visual artist. He recorded his first albums in the late 70’s, but his musical career really took off when he moved to Austin, where he achieved underground fame through the album Hi, How Are You in 1983.

Kurt Cobain frequently wore the t-shirt of the album cover, with its famous Jeremiah the Frog and even wore it to the 1992 MTV music awards. Johnson’s musical style is often associated with the lo-fi movement. The latter refers to using a primitive recording method to deliberately obtain a “dirty” sound. During the same period Johnson was interned in a psychiatric hospital several times.

A prolific designer, Johnson’s first outlet for his drawings is as the cover of his albums. He works almost exclusively with marker on paper or notebooks. His designs are both colorful, naive and display great sensitivity. They are populated by characters from his imagination, his daily life and mass culture. Through them he tackles the universal themes of life and death, love and violence. 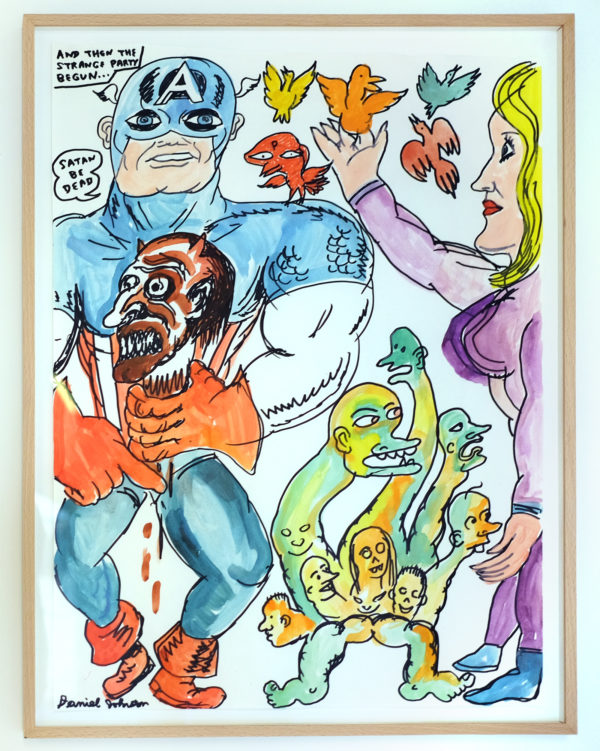