” The transition from painting trains to any adulthood artwork I’m doing has been a gradual move with some giant leaps here and there, but slow and steady. But doing trains and graphic arts or animation, these things are all their own pockets. There are stylistic connections to it all because it’s my personality that comes through.”

Todd James’ brush strokes critique the American way of life while simultaneously expressing his affection for it. Employing satire, James’ work exposes the comic book horror of the modern world. The vivid, hyper-coloured works are loaded with humour and metaphor: the sexualization of weaponry by the arms trade lobbyists, the hedonist cliché that is the idea of American happiness, Western stereotypes of feminine beauty, the stylized portrayal of violence in modern media (middle Eastern terrorists, gangsters and the disturbing, hyperreality of video games).

However, the graphical aesthetic of James’ critique is by contrast almost fauvist in its attractiveness, a paradise of brightly colored shapes and minimal form. The duality that arises out of this fascination with the aesthetic form of the message and the political charge of its content exposes the stark contradictions that surround us in the reality of our world today.

Todd James goes beyond the sentence to signify, subtly through the artwork’s beauty, our sense of belonging in this crazy world. The New Yorker’s iconoclastic aesthetic makes reference to the aesthetic of advertising, American cartoons and Matisse. The work of Todd James Describes a schizophrenic society, acutely aware of its own responsibility but bewitched by casual hedonism. His plastic humour of James serves as fuel for the progressive mind.

He started painting the New York subway system under the name REAS when he was very young. Since, this self-taught artist has developed a multidisciplinary practice. He does not hesitate to work beyond the contemporary art field to create, for instance, logos for the Beastie Boys, Mobb Deep, Red man, Eminem or Kid rock to make an album cover for Iggy Pop, to imagine the decadent bear suits for Miley Cyrus’s performance during the MTV awards , or lately to direct the music video for the song “The Troubles” of U2.

He created, with Barry McGee and Steve Powers, Street Market at New York City’s Deitch Projects. This exhibition was selected for the 2001 Venice Biennale. In 2004, he also participated in the group exhibition Beautiful Losers which travelled to several museums in the US.and Europe. The Street Market installation was Rebuilt and expanded for the L.A. MOCA “Art in the Streets” in 2011.

His works have been shown at numerous museums and galleries worldwide, like the Tate Liverpool, the Yerba Buena Center for the Arts or the Institute of Contemporary Arts in Philadelphia. 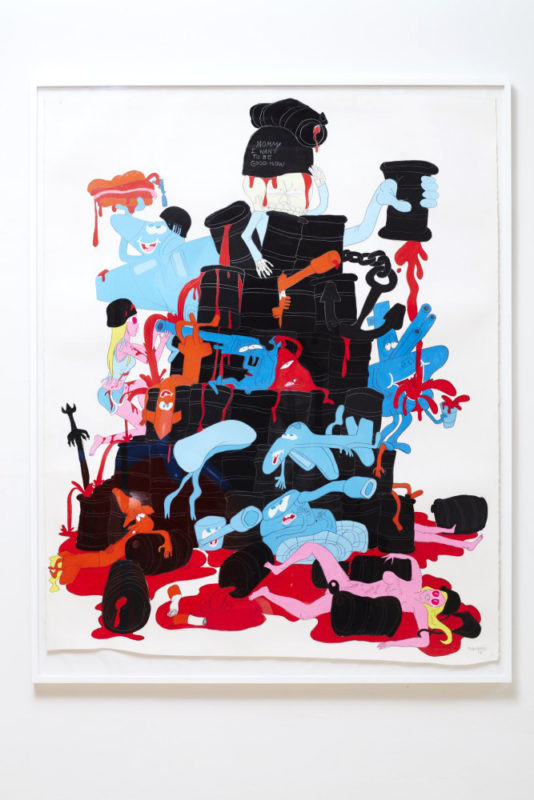 Todd James Mommy, I Want To Be Good Now